A recent study regarding the risks and injuries in the bounce house rental industry fails to consider several important facets according to many in the field. While it is true that the number of injuries has risen over the past decade or so there are several key  facts that were not considered by the publishers of this study, according to John Carr, head of the American Inflatable Alliance.

The most important argument is that while the numbers in the reports sound high the actual percentage of injuries per rental remains extremely low. According to Carr, who is a leading insurance provider to roughly one thousand companies across the United States claims that reported incidents of possible injury numbered  less than one in one hundred thousand uses of inflatables. Additionally, the majority of these injuries never resulted in a hospital visit or a medical expense.

David Mandt, a current spokesperson for the International Association of Amusement Parks and Attractions agrees issuing a statement on Today.com that insists inflatable play structures have fewer injuries than common playground equipment that can be found in virtually every school yard in the America. As stated in previous articles, we believe that many of the injuries result in not providing the necessary supervision and ignoring the rules that are clearly posted on each inflatable unit. 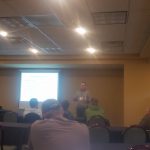